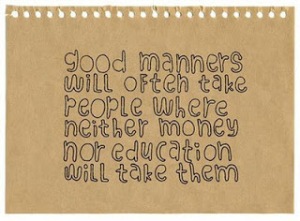 When you’re not on stage, either in rehearsals or performance, be quiet.  The sound of your voice is distracting to those who are on stage, even if the audience can’t hear you.  The green room typically isn’t a place you can speak in normal tones.  I recently did a show where the action on stage was very quiet but the green room was very noisy, and not only did it throw me off, it was so audible to me that I can’t believe the front rows of the audience couldn’t hear it, too.

I’ve also heard people standing in the wings talk in a normal voice rather than a whisper.  It’s just disrespectful to those who are on stage.  If you have to do more than whisper, go far enough away from the stage that you are certain that no one can hear you.  Depending on the design of the theater, even the dressing room may not be far enough away.  Just think about where you are before you start speaking.

I understand that performances can be tedious if you have a small role, and staying silent for two hours isn’t the most fun in the world.  When the offstage sounds start to resemble a party, however, that’s too much.  There’s something in between.  Find it.