The first thing I do with all of my new acting students is introduce them to their feelings.  Even the people who seem quite emotional avoid their feelings, they just do it in a slightly different way than everyone else does.

Because feelings are an actor’s stock-in-trade, his primary tool, you have to be comfortable experiencing them.

Feelings aren’t bad, you know.  Even the negative ones – anger, frustration, sadness – aren’t bad.  They are trying to tell you something about your life, that’s all.  When a negative feeling wells up inside you, the best question to ask yourself is, “What expectation did I have that isn’t being met?”  (There are also a couple of follow-up questions to ask yourself, but that isn’t the purpose of this blog!)

But somewhere along the line, we got the idea that it isn’t good to feel our feelings, and so we opt out of them as much as we can.  Even the positive feelings.  We are only slightly more comfortable with letting ourselves feel positive feelings to the fullest than we are the negative ones.

I am always surprised when a student reveals to me, usually in the first class, that he doesn’t feel his feelings.  I use the male pronoun arbitrarily – I’ve had just as many women acknowledge this about themselves.  For me, missing out on your feelings is missing out on part of life, and knowing that I don’t feel my feelings would send me on a mission to understand why (but that’s just me.  You won’t travel that road until you’re ready to.)

It’s interesting that someone who knows he doesn’t feel his feelings would come to an acting class, but perhaps it’s his inner self sensing that he’s ready to try to do so.  Not all of the people like this who come to class stay, but the ones who do are very courageous, and they tell me the class has had an impact on their personal lives, as well as their acting.

But even the ones who don’t know they aren’t really in touch with their feelings realize it in short order.  And while it takes some time to really get comfortable with them, they also know in that moment that only by doing so can they produce acting worth watching. 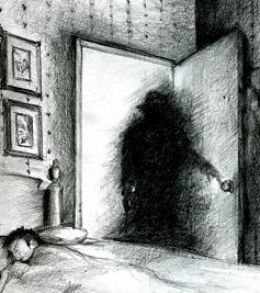 Feelings aren’t bad; they’re just scary.  Which is why you want to make friends with them slowly.  By gradually getting in touch with them, and by starting with the most benign feelings you can, you’ll realize that they’re just the boogeyman in the closet.  That nothing really terrible comes from feeling them; on the contrary, extraordinary good can come from feeling them, both on stage and off.

Here’s what I tell the people who are most afraid:  When I was little, I was the Good Little Girl.  I seriously believed that Perfection was possible long after I should have realized it wasn’t.  This wasn’t a stance forced on me by my parents in any way; on the contrary, it was entirely my choice.  Feelings like anger and disappointment and sadness were all things to be sucked up and ignored.  Surely no one would like me if they saw that I was capable of such terrible feelings!

But from the very beginning of my life, to the extent that one can imagine such a thing, I wanted to be an actress.  I think on some very instinctive level, I gravitated toward it because I understood, even at that tender age, that it was okay to feel all of my feelings on stage, including the “bad” ones.  It wasn’t me up there, after all – it was a character written by a playwright.  I could use all of my own emotions in service of creating a believable character without anyone judging me as wanting.  In fact, crying and screaming and being afraid – when appropriate in context – actually earned me praise.

Acting was very cathartic, because it gave me an outlet for feelings I wouldn’t release in real life.  As I got older, I realized that while those feelings I expressed on stage did indeed have their root inside the real me, no one watching had any idea what their deep, dark source was.  So I was completely free to indulge them as much as I liked!

I wonder, too, if the willingness to be so free with our feelings is one of the things that non-actors admire about us (aside from our ability to memorize all those lines!)  They know they could never be so brave, and admire those who can.

While the feelings that we feel on stage are, indeed, our own, they are conjured up not by our own experiences, but rather by what we imagine the character might feel in this particular set of circumstances.  This creates a little more freedom to let go; because the circumstances are entirely imaginary, they can’t harm us.  And when you are really working well, you become a way-station for them, not a holding tank.  By the end of the evening, if you’ve fully released them to the audience, you can make your way to that after-show party without the remnants of the tragic figure you played on stage following you home!