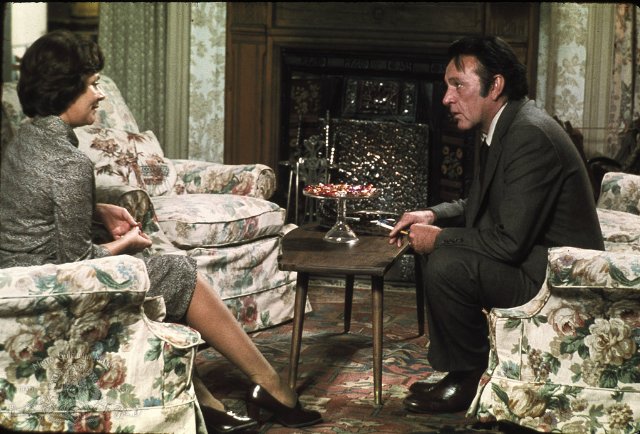 Anne is working on the Dora Strang monologue from Equus, featured in a couple of earlier posts.  I’ll be referring back to it at some point for an expansion of what I’m talking about in this post; today I just want to speak personally to Anne about something we discussed last night.  I am posting it generally because I think others might get a little something out of it, too.

At one point, Anne used the word “unemotional” to describe Dora, and I suggested that in general, it’s not a useful word because it’s boring to watch, but that there is a way to use it that can be effective.  And we went on to talk about the scene in other terms.

You backed off the word, Anne, because you realized it’s an adjective.  I told you that adjectives and emotions are perfectly okay to identify – in fact, they are very good to identify for two reasons.  One is that they typically lead you to Tone, which is an important but sophisticated element we’ll talk about way down the road.  The other is that they are your first clue in script analysis, which is what we’re dealing with at the moment.  We’ve talked about finding your feelings in a scene, relating to your partner, and identifying your beats and playing your verbs.  But as you all discovered last night, your verbs are only part of the equation.  HOW you play them depends on who your character is.  Without having a clear and comprehensive understanding of your character, it is easy to go wrong.

This is one reason why playing adjectives is so dangerous.  You can completely miss out on what is really driving your character if you approach it this way.

So let’s get back to Dora and the word “unemotional”.

“Unemotional”, like all adjectives, is too general to play.  WHY someone is unemotional makes it specific, which in turn makes it interesting.

Am I unemotional because I think it is inappropriate to be emotional in certain contexts, like at work or with people I’ve just met?  Because I was taught as a child that showing emotion results in punishment in my family?  And was that punishment corporal or simply a withholding of love?

Am I unemotional because I’m afraid that people won’t like me if I show them who I really am and what I really feel?  Because I don’t like the “bad” emotions I feel, like anger and envy and so I try to pretend that they aren’t there, or at least make sure that other people don’t see them?  And maybe it’s easier to shut down all of my emotions rather than risk that my anger slip out when I’m not watching myself?

Am I unemotional with Alan because I don’t believe in coddling a child?  The real world is a cold place, better that I should teach him how to function within it!

When I answer these questions, I come up with some basic needs for my character:  a need to be the consummate professional in business and to be perceived as well-mannered by all I meet.  A need to protect myself from punishment from others or to gain their love by being the Good Little Girl.  A need to be liked.  A need to be good, to not be bad, to get into heaven.  A need to give my son the best tools I know for dealing with the world.

These needs drive HOW I do things; that is, they drive HOW I play my verbs.  The mother who doesn’t want to coddle her son is a different woman than the one who doesn’t like her own “bad” emotions.  Although human needs are rarely so simplistic, and so you might find a variety of elements behind Dora’s “unemotional” nature that come into play at different moments.

But the thing all of these alternatives have in common is the need to repress emotions.  Human beings are emotional by nature.  We are all born with them.  Someone who is “unemotional” is working hard to repress them.  And THAT’S what you play as an actor.  You don’t play “unemotional”, because it’s uninteresting to watch.  But someone repressing specific emotions when they rise up in her?  That’s a very active and compelling choice.

When your character is drunk, you don’t play “drunk”.  You play trying desperately to seem sober.

In other words, when you’re on stage, you have to show the audience the Yin and the Yang.  We don’t know what you are repressing unless you let it leak out just the tiniest bit.  In fact, we may not even know you ARE repressing it if you don’t let it leak out.  We may just think you aren’t a particularly good or interesting actor, without understanding why.

Remember, we just met this character, and we have a very limited time with her.  In a case like Dora, who is a supporting character in the play, we may only spend 15 minutes with her.  We don’t have the luxury of learning over time that she represses her emotions, or why.  You need to convey that to us quickly and comprehensively.  And you do that by showing us both the emotions and the repression of them.

This sort of inner struggle – to not love someone you think is wrong for you, to do what you know is right despite your fears, to maintain control of your anger when you have been pushed over the edge by your young child or your boss – is fascinating to watch on stage, and the basis of many moments in dramatic works.

Also, even “unemotional” people have events in their lives that are so traumatic that it creates a windstorm of emotions inside of them that even they cannot repress.  This is such a moment for Dora.  Despite protecting herself for years, she is the proverbial fat that has been flung into the fire.  It is NOT business as usual.  (Plays rarely are.)  Which makes it even more interesting to watch.  What happens to a woman who is losing the battle to hide behind her usual façade?