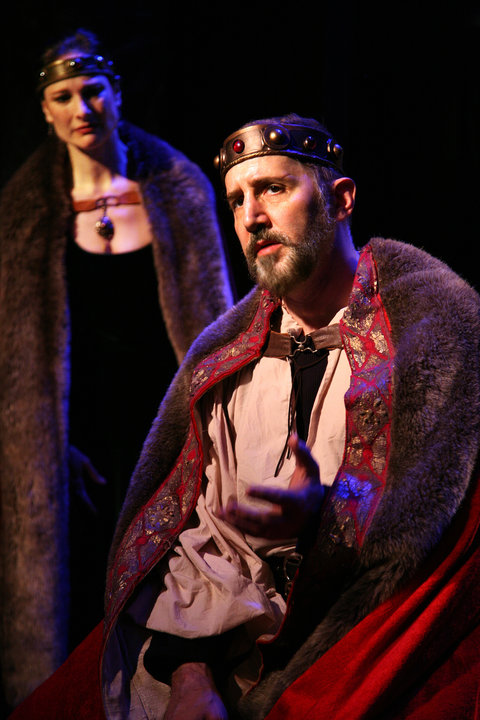 Love may not be the first thing you think about when you think of Macbeth.  Pride, ambition, and murder probably are.  And yet, the first thing you should look for in any play – even a grand and gory tragedy like Macbeth – is love.  Love is the driving force of mankind, and no one wants to see a play that doesn’t have it.

As an actor, you must always look for the love.

I’ve just come from seeing the American Shakespeare Center’s production of Macbeth, with James Keegan in the title role and Sarah Fallon as his wife.  (No, this isn’t a photo from that production, but one my friend David Mead was in several years ago.  I don’t know the name of the actress who played Lady Macbeth.)

Now, I am an unabashed fan of the ASC in general – I’ve never had more fun at a theater than when I see their shows – and one of the things I love about their acting is their passion onstage.  Every one of the ASC actors is fully committed to the moment, from start to finish, and goes at it full tilt.

Here is a portion of director Jim Warren’s program notes for Macbeth – notes he sent to the cast before rehearsals began:

I want three-dimensional characters that [sic] allow us to care about them.”

Warren concludes his notes with this:

“We can be great at playing the darkness, creating the supernatural, and grossing out the audience, but if we’re not great at finding the love, telling the story, and giving the audience characters to care about, then nothing else matters.”

If you don’t find the love, then nothing else matters.  No one cares.

Look at the words Warren uses:  big, truly, madly, deeply, rips, warrior, awesome, sexy, Soul Mate, love-of-his-life, blood brothers.  There is nothing indecisive about his directions to the actors.  He is as committed to what he sees in the play as his actors are in the performance of it.

And notice, please, that there is love between all the characters, not just between two people who are sleeping together.  There are different kinds of love, and you must always search for how you love the other characters in the play, and make that love as strong as possible.