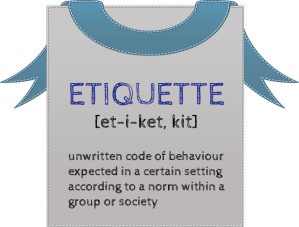 This is a matter of courtesy to your audience, not your co-workers.

The audience would like to hear what you are saying.  A good script has had all extraneous words excised from it.  The audience needs to hear every one that remains.

Think of a stage as a room.  Whatever voice is adequate to fill that room, whether it’s the size of a standard classroom, or your living room, or a spacious great room, there is a voice that will fill it appropriately.  We don’t shout in kitchens unless something is burning or you’re about to pour vinegar into the pot, thinking it is wine.  Most kitchens aren’t that big that we need to raise our voices above normal speaking tones.

Remember that “normal” is dependent on the size of the room you’re in.  The larger the room, the louder your voice needs to be in order to be heard by anyone in that room.

Many new actors use a volume level that is appropriate to the size of the stage, but NOT to the stage plus auditorium.  The room you are occupying and have to fill is the entire space used by both actors and audience.  It doesn’t matter that the person you are speaking to is a character standing four feet away.  Your Four Foot Voice isn’t going to make it to the tenth row.

Some people have naturally loud voices, and some people have very small, quiet voices.  I’ve had students doing a scene six feet away from me, and I can barely hear them, their voices are so small and shy.  It’s fine to use that voice off stage, but on stage, your voice has to be big enough to be heard, as the saying goes, by the Little Old Deaf Lady in the Back Row.

In other words, the person sitting furthest away from you needs to be able to hear what you say as clearly as they could if you were sitting next to them.

Sometimes when I stand in the back of the theater and ask someone to shout, I still can’t hear them.  They are sure they are roaring, but I have to strain to understand them.  So have someone give you feedback on how audible you are from the back row.  Once you get a thumbs-up from them, you know what is required and that you can actually produce that volume, even if you aren’t accustomed to speaking at that level.  (If you can’t produce that volume or sustain it over multiple performances, that’s when you need to seek the help of a vocal coach, who can teach you how to use your vocal instrument.)

Remember that the quieter moments in a play nevertheless have to be heard by those in the last row.  Stage whispers aren’t like ordinary whispers.  Check with your director on your levels, and take his admonitions seriously. 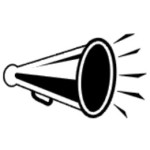 If you are challenged in this area, then it’s going to be even harder for you to learn to shout when you need to in the context of a play (because you’re angry, for instance).  Best to overcome the challenge now, before you’re faced with that kind of scene in rehearsals!

One last thing:  Remember that people absorb sound in the same way that the soft materials used in soundproofing equipment do.  In other words, the larger the audience, the louder you have to be to be heard.