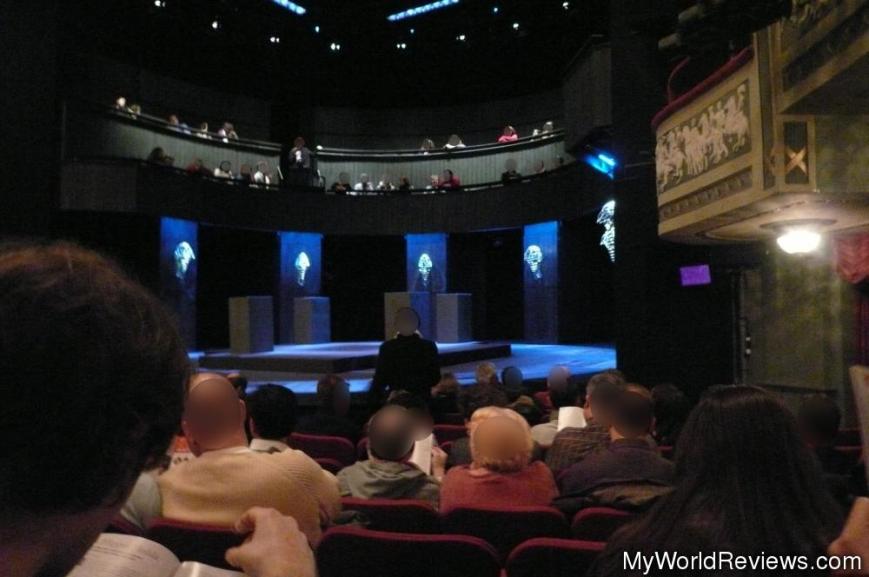 The major concern that impacted how my student interpreted the opening monologue in Equus was a need to grab and hold the audience’s attention in the first five minutes of the play.   I agree with the premise in principle.

Should you, as an actor, concern yourself with this?  Honestly, I think it’s the director’s responsibility.  Your responsibility is to make your character a believable person who fairly represents the playwright’s intention.  If you do that and the script is a good one, then the matter of “is the audience going to stay awake for the play” probably won’t arise.  If it does, the director will notice and correct it.

In a quality script, the playwright has eliminated this problem.  Peter Shaffer is one of the best British playwrights of the 20th century.  Equus won a Tony, a Drama Desk, and a Drama Critic’s Award.  It’s very likely that my student was worrying needlessly, but let’s not take anything for granted, and talk about why the script works in this regard.

First, Shaffer prefaces the script with some Author’s Notes about the staging.  The photo above is from the recent Broadway revival, and it is loyal to the playwright’s concept in the important ways.  The original Broadway set is below, with the “boxing ring” described by Shaffer.

Shaffer asks that the entire cast sit on benches behind the boxing ring throughout the performance and enter the ring for their scenes.  When the horses enter the action, the actors playing them rise from the onstage bench and strap on one of the horse heads that hang around the perimeter.  At the start of the play, Dysart sits to one side and speaks to the audience while Alan and Nugget embrace center stage.

The 1974 photo shows you what Nugget looks like.  This highly theatrical and creative imagining of the horse captures the audience’s attention from the moment the lights come up.  All the actor playing Dysart has to do is not lose the audience’s attention in the three minutes between Nugget’s exit and the revelation that the boy embracing him blinded six horses while tending them in the stable.

Shaffer’s gives Dysart a wonderful opening monologue, one that raises more questions than it answers.  Dysart is clearly a man in pain, at a crossroads we don’t yet understand.  He uses words like “lost” and “intolerable” to describe himself, providing intrigue.  Equus plunges us into suspense on a number of levels almost immediately, and when we learn about the blinding at the five minute mark, we are firmly hooked.

This frees the actor playing Dysart to simply play the truth of this man’s life.  At least, this is where he should start.  A month into rehearsals, once he begins to get a good handle on who Dysart is, the director can evaluate whether the first five minutes is strong enough to grab the audience.  A good actor can make the necessary adjustments in a rehearsal or two.  But in the early days of the production, you want to throw yourself into what your character is feeling.

Does the actor need to go out of his way to make Dysart likable?

There is nothing in the script that makes Dysart unlikable.  You may or may not want to have dinner with him, but audiences empathize with good people in painful circumstances.  Make him a real human being with real feelings and needs, and the odds are very good that he will be likable.

What about intentionally playing the humor of the first half of the monologue to deliberately contrast with the serious tone of the second half, as my student did?

The opening of a play is not just about grabbing and holding the audience’s attention.  It establishes the world of the play as well as its tone (hopefully, your director defines both for you; in scene class, you need to figure that out yourself.)  As an actor, you must be faithful to both and not sacrifice either in the name of making yourself well-liked by the audience.  Humor should be injected when it is appropriate, not for its own sake.

The solemn and almost sexual ritual between Alan and Nugget takes place during the first half of Dysart’s monologue.  Use too much or the wrong sort of humor, and you risk mocking this moment, violating the sacredness of what happens between the boy and horse in the rest of the play.

Equus is an intriguing and moving drama, one that doesn’t end on a hopeful note.  It’s not a laugh fest.  All dramas typically have moments of humor, and I encourage you to find and play all of them in order to give your audience some stress relief, BUT you want to discover the tension of the scene first.  Only then can you determine if there is pressure that must be relieved.

We want to entertain the audience, to get and hold their attention.  But we don’t want to make choices that aren’t in keeping with the play.  That’s where you have to start.  When you focus on “likable” and “how can I grab the audience’s attention”, you’re going for product, not process.

I don’t know if humor is appropriate in that monologue or not.  It’s certainly worth investigating.  However, deciding to play up the humor to make the character likable without first examining the character to see if that choice is appropriate is an arbitrary choice.  You can’t choose unless you have options.  Use your rehearsal time to discover the options.  Then, and only then, can you make the best choices.