[This is a purely introductory piece on blocking — I have much more useful stuff to say about it down the road.  But I’ve got to start somewhere, and I’m still traveling, so this and the next two posts will fill in the gap until I can get back to my Rehearsing series.]

How you go about this depends at least in part on your director. 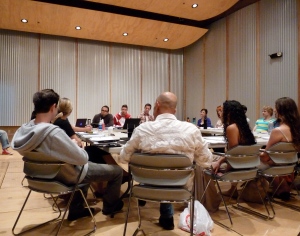 There are directors who like to sit around a table with the script, working on relationships and script analysis, until the actors have their lines memorized.  Only then will he allow them on the set.

There are directors who like to begin with blocking, perhaps preceding blocking with a single read-through.

The directors who begin with blocking may come into rehearsals having pre-blocked the entire show, and will tell you where to stand and when to move.

Or they may let you make your own decisions about blocking and suggest changes either in their role as traffic cop or because they think they have a better or more interesting choice they’d like to try.  But first, they want to see where your instincts take you. 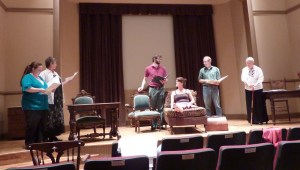 In this last group, there are directors who, once they’ve settled on something that works, will stick with it for the rest of the rehearsal period.  And then there are directors like me, who will continue to tweak the blocking as rehearsals unfold and we learn more about the characters and the play.

And then there is yet another group of directors, who will allow the actors to wander as they will for a few weeks and then put some structure to it.  The wandering is all part of the exploration of the play, and if you explore efficiently, you will have a pretty good sense of what works at the end of this initial period.  But this approach is best used with experienced actors who are all very comfortable with creating their own blocking.

How long blocking takes depends in part on how physical the play is, and of course two different productions of the same play may end up being very different in this regard.  Farces or very episodic plays (The 39 Steps, A Christmas Carol) take the longest time to block.  In a community theater rehearsal of a blocking heavy play, eight to ten pages may be as far as you can go in one night.

A word about the movement in the stage directions of a script:  Sometimes the movements are the playwright’s vision; sometimes they are from the original production.  Either way, you should view them as suggestions and not mandates, especially if your set is configured differently than either the original production’s set or the one the playwright had in his mind’s eye when he was writing (and who knows WHAT that looked like!)  Your job as an actor is to find and use movements that are organic to your own interpretation of the character and the play.  Honor the dialogue given to you by the playwright both in terms of your characterization and your physicality, and the result will be “right” – whatever THAT means!

The only exception to this is when the playwright describes movements that are essential to the plot and not revealed clearly through the dialogue (such as in Frederick Knott’s Wait Until Dark).

One thought on “Blocking the Play”